Srikalahasti
Besides the Nagalingam, there is a rock on which the three devotees of Shiva  are seen to be offering prayers.  A spider (Sri), a snake (kala) and an elephant (hasti) are making offering to a lingam. 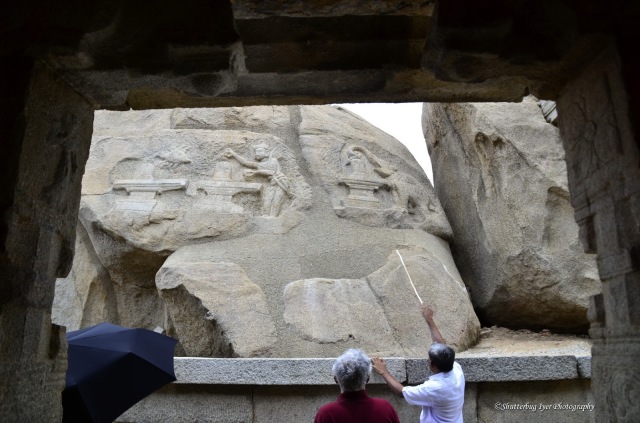 Like Loading...
The naga lingam is another imposing sculpture iIn the Lepakshi temple. A  7 hooded naga rises  over the lingam behind the sanctum sanctorum. . The guide narrated an interesting story about the naga lingam. A young sculptor was hungry and asked his mother who was working in the kitchen just opposite the present lingam, when meals would be ready. She replied that it would take at least another hour. To pass time, the sculptor built this naga lingam in just one hour. The mother, coming out of the kitchen was astonished . Because of her ‘drishti’ the sculpture developed three cracks. Therefore, no formal puja is performed for this lingam.
The lingam is flanked by a panel of Saptha maathas.
The tip of the naga hood is visible from the nandi several metres away., in the outskirts of the town.

The nandi is situated about 200 meters from the main temple. The sixth praakaram originally  extended upto the nandi. Now streets and town houses (and an APTDC guest house) intervene. 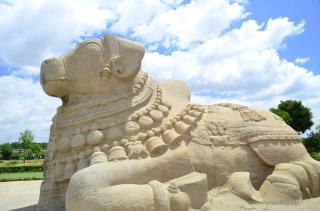 The Granite nandi  measuring 8 M length and 6 M high is considered to be the largest Nandi in the world. The one in Thanjavur is second.  Even among monoliths, it stands on top, second only to Gomateswara. I did a rough calculation of the mass of the bull. At 8x5x 2.5 (aprox) it should weigh at least 250 tonnes considering density of granite to be 2.5 T/ Cu.M

The crouching bull is facing the Naga linga at the temple and strikes a very natural and elegant pose. The garlands, kaasu malai and mani malai are remarkable for their exquisite finish.

Lepaskhi  is situated about 135 Kms North of Bangalore, in the District of Anantapur, Andhra Pradesh. It is an ideal one-day outing for those interested in history, heritage and archaeology in addition to the spiritually inclined.
The small town is famous for the Veerabhadra swamy temple and the monolithic Nandi.
The earliest inscription about the temple dates to 1533 C.E. Folklore takes it to the Treta Yuga when Lord Rama visited this site. It is here that Jatayu attained moksha . The name Lepakshi is said to be derived from ‘Laya Pakshi’ (unconscious bird). Another version attributes the etymology to ‘Le Pakshi’, meaning ‘Arise, Bird’ uttered by Rama.  There are also a Ramalingam and a Hanuman Lingam installed by Rama and Anjaneya respectively.
The entire temple complex is built on a monolithic convex rock shaped like a tortoise.- Kurma Saila. The original temple had seven enclosures, but only two survive now. The rest are encroached by residents and part of the town. The Nandi was originally in the sixth praakaram.
Some of the attractions here are the Nandi, The balancing pillar, the murals on the ceiling, kalyana mandapam, Ganesha, Sri Kalahasti, Sita’s paadam, Naga Lingam, Bhikshatanar, Mohini, etc. I shall try to showcase some of these in these blogs, in installments.

Paramapadham – the Steps to Heaven

The Durga Idol Makers of Chennai

A Dutch Fort in Chennai