Does this chariot wheel remind you of the Sun Temple at Konark? The Sun temple was built almost 100 years after this Chola masterpiece.

From a pillar mandapam in Ekambareswar temple, Kanchipuram.

In ancient Hindu temples, you can find exquisite carvings not only on the temple walls and pillars but also on the temple chariots. Though these are in wood and of more recent vintage, the beauty of the carvings cannot be ignored.

The above dasavathara depiction on the temple chariot (ther) is from the Sree Ranganatha temple at Srirangapatnam.

Darpana sundari in soapstone in Belur

The 11th Century Chennakesava temple build by the Hosalas have some exquisite sculptures in soapstone. the most iconic of them all is the Darpana Sundari – the beauty with the mirror.

The Thirumalai Jain Complex in Tamil Nadu consists of Jain temples and caves built/carved on or after 9th century CE. The most prominent feature here is the 30 ft tall (?) monolithic statue of Neminath believed to be carved in the 9th century.

Thirumalai is situated in Thiruvannamalai st. of Tamil Nadu. The nearest town is Arani.

The hill on which the Jain complex is situated

However, in the Baijnath Temple in the Kangra district of  Himachal Pradesh the Nandi is in standing posture. This temple is about 8 or 9 centuries old and houses a Swayambhu linga. It is situated on the banks of river Binwa with a breathtaking view of the Dhauladhar range of the Himalayas.

Another curious feature was the image of man hanging from the Nandi’s tail. I searched the web to find the story behind this but could not find any lead.

In this temple, you are required to leave outside all leather items, including bags, belts, etc. beside footwear.

This is neither a Narthana Ganapathi nor an Uchishta Ganapathy. Seems to be a combination of the two. 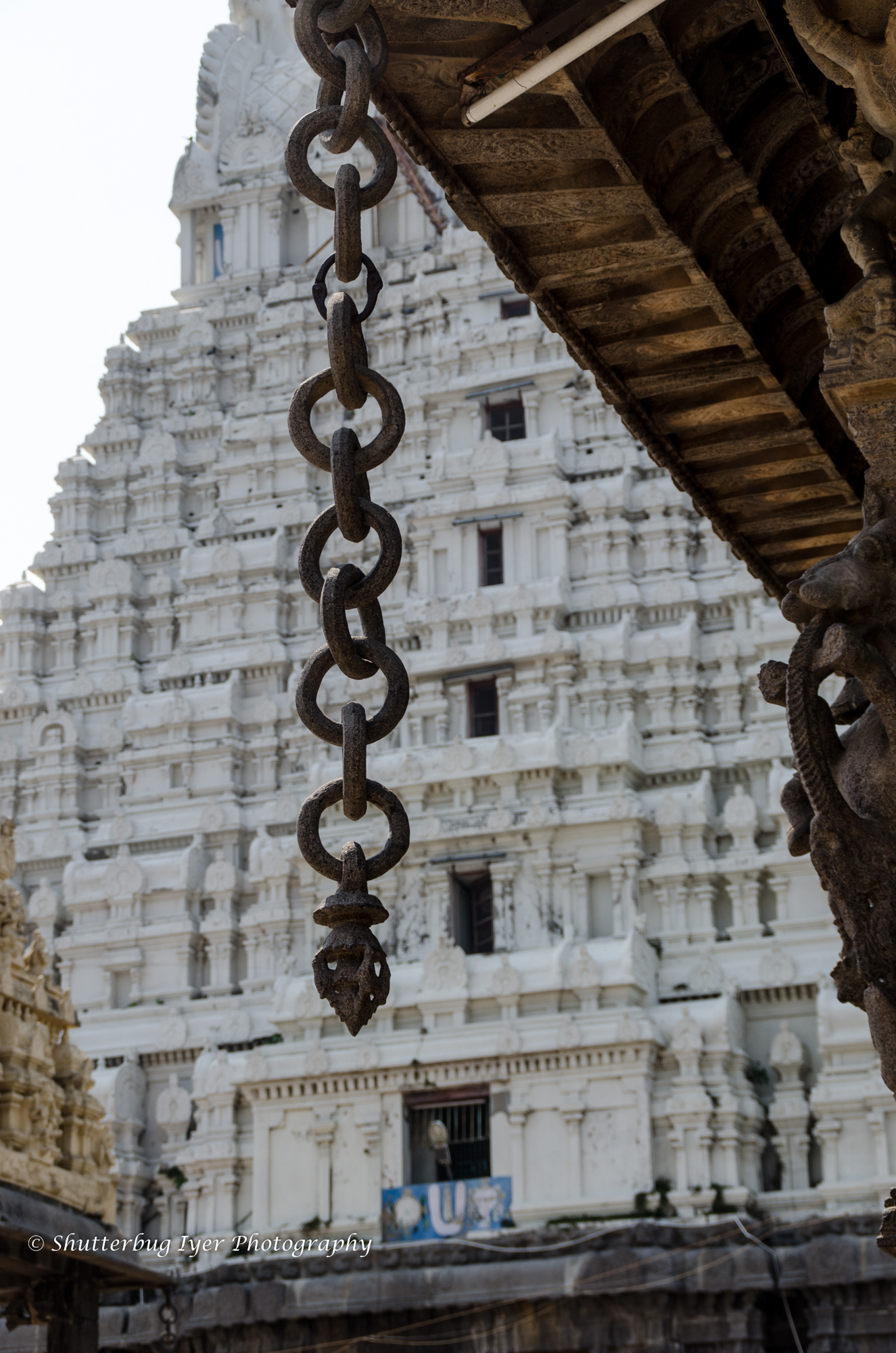 The 100-pillar mandapam at Varadaraja Swami Temple was built around the 15th century by the Vijayanagar rulers. It is well known for the intricate carvings on the pillars. A well-known feature is the monolithic chains hanging from the corners of the mandapa. These chains form an integral part of the roof and have 12 links and an ornate pendant all carved out of a single granite piece.  A masterpiece in stone craft and an architectural marvel. 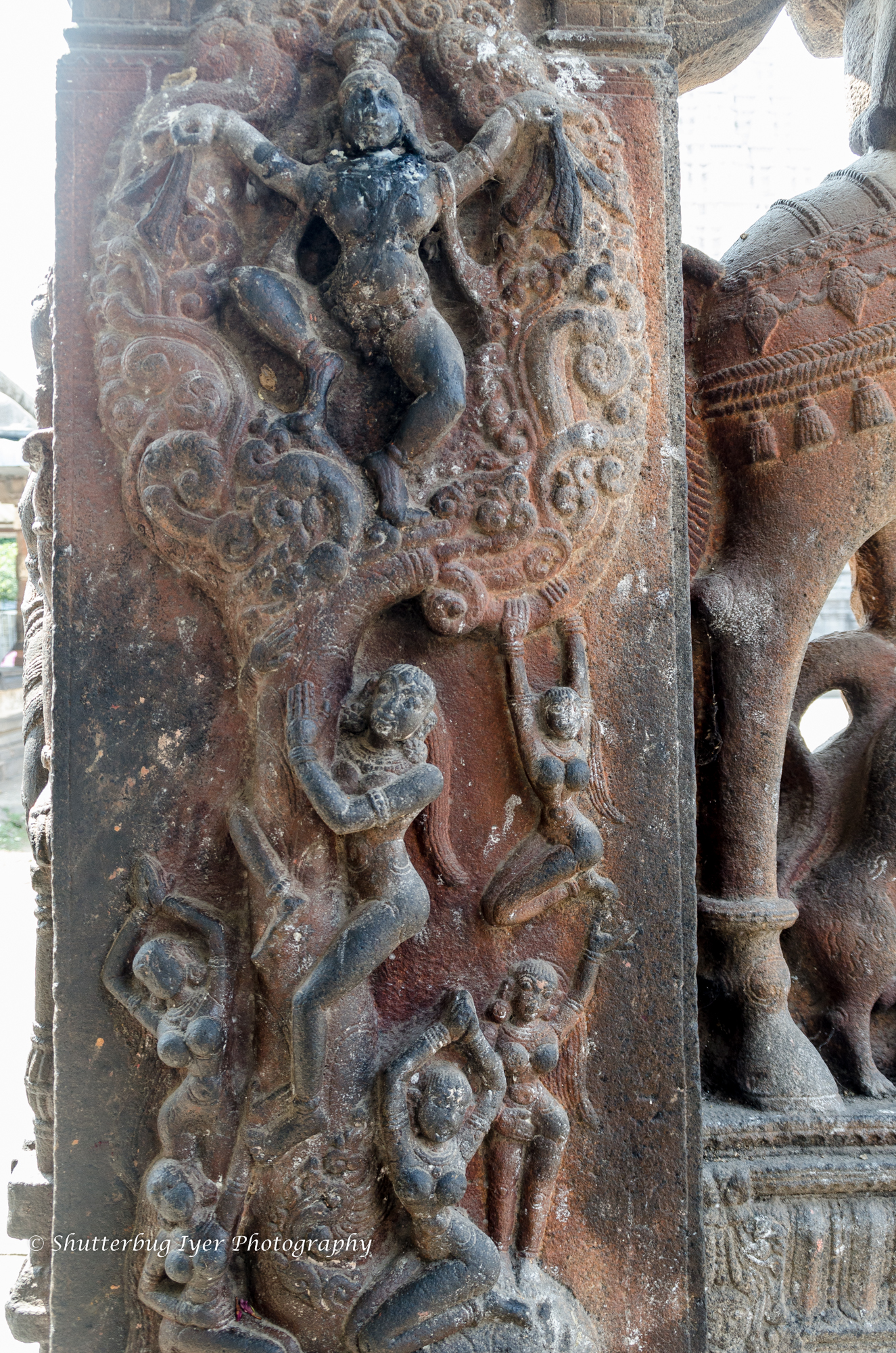 The story of Krishna stealing the clothes of gopis is an interesting and a recurring theme in many temple sculptures. I have already posted a couple of blogs on these with photoes from different locations.

Krishna at it again

The two pictures in this post are from Kanchipuram but from different sources. The one above is from a mandapam in front of the West entrance to Sri Varadaraja Perumal temple.

The one below is a mural from a private house near the Varadraja Perumal temple. It belongs to one of the descendants of Prativadi Bhayamkaram Annangaracharya. The paintings were done around 1930 and are need of restoration. The helpful owners opened up the door and showed us around all the paintings.

After seeing the Vaikunda Perumal Temple, we wanted to see the Mathangeeswarar temple, which according to Google Maps was nearby. However, no one could guide us properly. We ended up at the State Museum (small, but enthusiastic staff) and having an early lunch. After lunch, we decided to have one last try. We parked the car and started walking on the busy Hospital Road. All of a sudden, between two shops, we saw the familiar blue and rusty ASI board informing about all kinds of offences and fines.

Going through the short passage we were pleasantly surprised to see a quadrangle with a small but imposing temple.

The Mathangeeswarar (or Mathangeswarar) temple is built on a high platform. The peaceful ambiance in the midst of the bustle of the bazaar is truly remarkable. There were a handful of young men reading and preparing notes. When we enquired they informed us that they are preparing for the state competitive examinations. To our query whether there is any spiritual significance for choosing this place to study, they said that it is only the peaceful ambiance which attracted them.  To our amusement, we found a polite request on the Mukha Mandapam not to sit on it for studying.

The style of architecture as highlighted by the lion pillars is definitely Pallava. The pillar details (ornate brackets, palagai & kumbha) indicate 8th century Pallava style.  The sanctum was closed when we were there but we understand that the main deity is Lord Shiva.

The mukhamandapam has six panels. Two are the Dwarapalakas.  The others are 1) Gaja Samharamurthy 2) Ravananugrah Murthy [click here for the background story,  my blog on Ravana and Mount Kailash]  3) Urdhva Tandava Murthy & 4) Gangadhara. 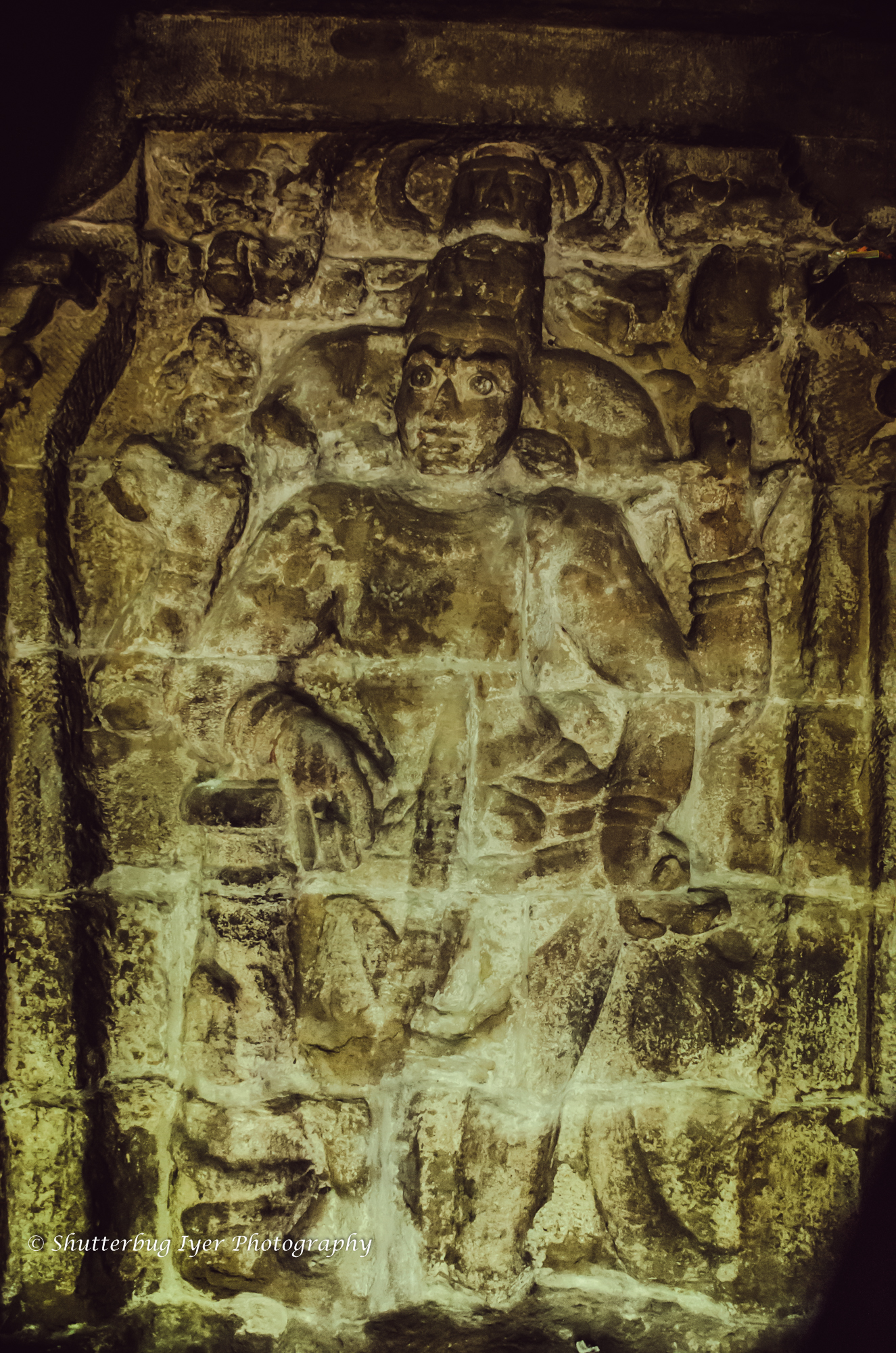 The figures on the outside walls are highly eroded.

There is Nandi with a broken face on a pedestal under a peepul tree but there is no Nandi mandapam. 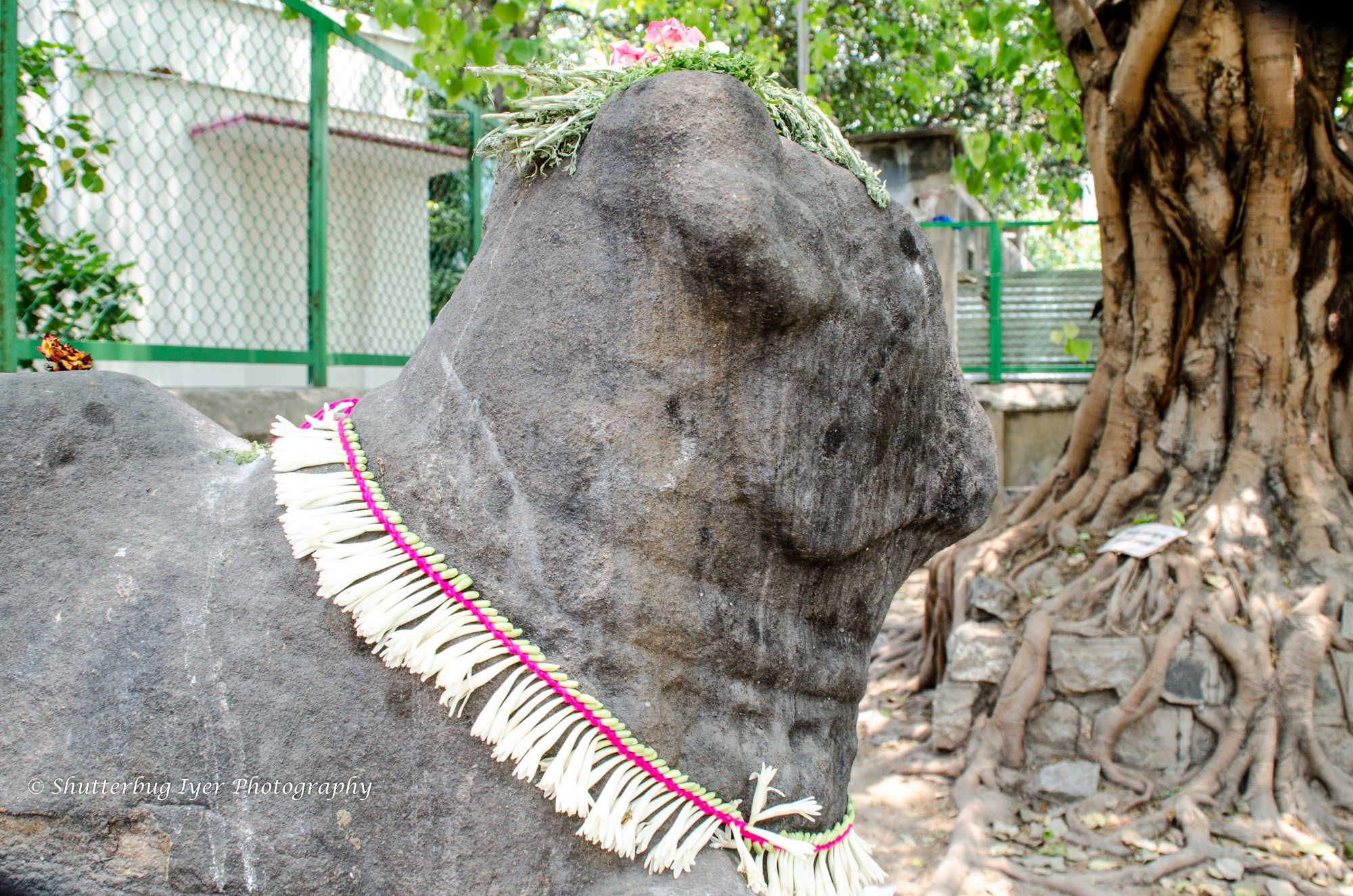 Another heritage monument neglected by the authorities and the public.

For the next Olympics