Garuda, the legendary bird akin to Brahmini kite is the vaahana (vehicle) of Lord Vishnu. He is often depicted in the anthropomorphic form as above. He is a protector and powerful. The legend of Garuda appears in Buddhism and Jainism.

From the Hoysala period temple at Belur, Karnataka.

From a pillar mandapam in Ekambareswar temple, Kanchipuram.

Govardhan pooja is celebrated in certain parts of India today. The legend behind this is as follows:

The pastoral folks of Gokul used to pray with lavish offerings to Indra for rains. Krishna advised them that they should rather be praying to Nature in the form of hills, trees, cattle etc. rather than appeasing Indra.  The people followed Krishna’s advice and stopped the offerings to Indra. Indra was enraged and he unleashed torrential rains with thunder and lightning on the Braj region. Seeing the sufferings and potential danger, Krishna lifted the Govardhan Mountain with his little finger as an umbrella protecting the entire region, its people, cattle and natural resources.

Indra did not relent. For seven days and nights he unleashed his fury in the form of torrential rains. On the eighth day, seeing that Braj and its people are still well protected, he conceded defeat and realized that the boy Krishna was none other than Lord Vishnu.

This episode illustrates the role of nature and the respect we must have for the environment.

In many parts, Govardhan pooja is performed for a heap of rice and/or vegeatbles (Anna koot) or a mound of cow dung or earth. The day is also dedicated to worship of the cow as a mark of respect and thanking for providing us healthy sustenance.

Mahabalipuram has one of the finest bas relief sculptures of this pastoral scene in the Krishna Mandapam near Arjuna’s penance. (7-8 century C.E) [above].

Vyaghrapada was a great devotee of Lord Shiva. He lived in a thillai forest near Chidambaram.

He used to collect flowers in the morning for his daily puja. Seeing that birds and bees suck nectar from the flowers, he wanted to get flowers even before dawn so that they are untouched and fresh. For this purpose he had to go deep into the forest in near darkness. This involved walking over thorns and sharp stones. Consequently his feet were affected so badly that even his overall health deteriorated.  Seeing his plight Lord Siva gave him legs of a tiger to manage the rough conditions of the forest. Hence the name Vyaghrapaada .Vyghra – tiger: pada – foot.

Vyaghrapada lived in Chidambaram for many years. He was a contemporary of Sage Patanjali. Shiva eventually gave his darsan as Nataraja and both Vyghrapaada and Patanjali attained mukti.

From one of the pillars in the Azhagiya Nambi Temple, Thirukkurungudi – one of the 108 Vaishnvite Divya Desams.

Interestingly, though this temple is a Vaishnavite Divya sthalam, it has also many Shaivaite elements as the sculpture above.

I had posted about the Tirpada Trimuthy, a form of Eka pada murthy of Thiruvottiyur Temple sometime ago.

Going through my archives, I found another image of Eka pada murthy – from the Madurai Meenakshi Amman Temple pillars. This is simple eka paada without elements of Brahma and Vishnu.

The image is next to the Rishabharooda Murthy

This is a rare sculpture of Vishnu as koorma (tortoise) avatara worshiping a shiva lingam. On a pillar in the 16-pillared mandapam in front of Ekambareswara Temple Gopuram, Kanchipuram. The mandapam has several other sculptures on the pillars but indifferent upkeep with haphazard steel structures and flex posters mar the beauty.

Dvarapalakas literally mean ‘Guardians at the Gate’ . Most Hindu temples have the images of dvarapalakas at the entrance. They have a lot of common features, but there are some special features based on the presiding deity, the local practices and the Agamas. For example, the dvarapalakas in a Shiva temple will usually have trishul, damru, gada, etc.

These dwarapalkas in Vydeeswara Temple, Talakadu have the usual features and in addition, they have torsos shaped like a Nandi. This is unique and I have not seen this anywhere else.

The Vydheeswara Temple is located in Talekadu (or Talekad) in Karnatake. It is beleived to have been built by the Ganga Dynasty in the 10th Century.

There is also a story of the Curse of Talekadu. More about it later.

I had shared my album of post budget Pondy Bazaar with the IIMA- Chennai group. One of the alumni Mr Srikant pointed out that this Pillayar has a Shanku and Chakram, normally associated with Vishnu. Only after his response, I noticed this uniqueness.

I have no idea about how Pillayar came to have the Sangu and chakram, but I am aware that the masons and sculptors of gopurams take liberties with the terracotta or stucco figures that go on the gopuram, often deviating from the accepted norms of iconography.  If anybody has any other explanation, please do share it with the readers of this blog.

The boy and the crocodile

Sundaramurthy Nayanar was an eighth-century poet-saint and one of the most important Nayanars.

He is believed to have performed many miracles thanks to his great devotion to Shiva.

The Northern face of the gopuram at Kapali temple depicts one such miracle. During his journey through Kongu Nadu, he was informed about an eight-year-old boy who was swallowed by a crocodile at Avinashi (near Coimbatore). Using his divine powers Sundarar resurrected the boy, to the amazement of all. This event is commemorated every year as “Mudalai vaay pillai utsavam” on Panguni Uthram at the Avinashishwarar temple, Avinashi.

Mahishasuramardhini is another recurring theme in my posts.

Ten-armed Durga is riding a lion as she slays the demon Mahisha. She is flanked by Ganesha and Kartikeya, which I found to be unique again. One of the other two female figures could be Saraswathi. The arch is embellished with paintings of the Durga legends. It is topped by a figure on a buffalo.

Next, we may see an ivory Durga. 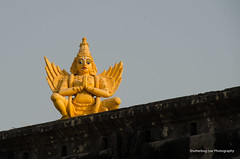 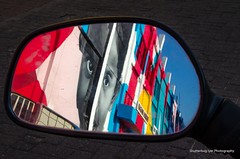 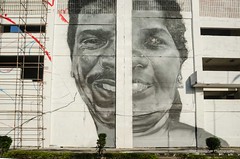 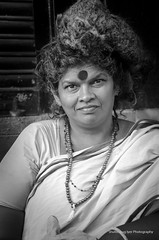 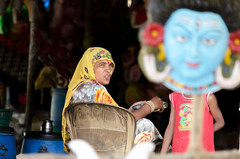